What Does Digital Mean? 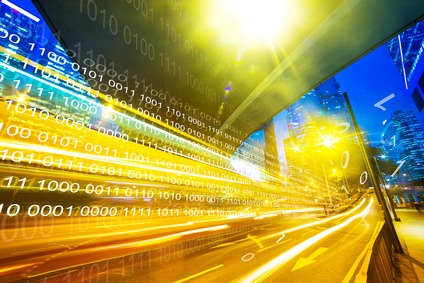 What Does Digital Mean?

I first became aware of a shift from analogue to digital in the 70s. We were school kids then and music was everything to us. We talked, pretentiously, as much about the quality of the sound as we did about the prog rock bands we followed.

Queen confused us – it was unthinkable that the band was actually gay – homosexuality had only been decriminalised in the UK in 1967 and it was to be another decade before people came ‘out’ in public. Besides, we were naïve 10 year olds and the words were just words to us.

There was no ambiguity though when it came to ‘hi-fi’. Technology then, as now gave us plenty of polarised choices: mono or stereo; sound or better sound; old or new.

From the prevailing miasma of innovation and men wearing robes, appeared something called Dolby Stereo. For us it was another new ‘thing’ on the radar, although it sounded more impressive than most as it came from a laboratory – the Dolby Labs.

I was thrilled when David Dean and Andrew Kerr, then sixth-formers whom I looked-up to in awe, explained the process to me. ‘They take the sound, convert it to numbers (digits) and then convert it back to sound. Whilst it’s digital, they can do mathematical transformations on it, like reducing the numbers that produce hiss.’ It was such a good explanation that I ‘got it’ immediately. Both David and Andrew went on to have brilliant careers, but it is Andrew’s words that come to mind as I retell the story. He said,

“Make no mistake, digital will change everything.”

As with all innovations, the technology itself is but one factor of many. Convenience, fashion, marketing and luck all play a part. The speed and the ferrous coating of the magnetic tape of cassettes tended to produce hiss. Dolby made it easy for manufacturers to drop-in a solution that gave them the bonus of a good marketing feature – Dolby Stereo noise reduction – no wonder it became a must-have for tape decks. Even if you couldn’t recognise it by ear, you’d rather have something like that than not!

It’s what you do with the digits that matters

For many people at the time, the term digital meant watches. Analogue watches had hands, and digital ones had, well, digits. But this simple example missed the most exciting point entirely. How the information was eventually rendered, be it as sound, numbers, light, pictures or prints was transformative at one level. However, the digital revolution was inescapable because of what it allowed: processing; manipulating; filtering, storing and transmitting whilst in the digital state.

To return to the digital watch example. Time in digital form, for example the number of seconds past midnight on January 1st 1900, could be sent to a variety of output devices concurrently. One device might use LEDs, another LCD or CRT screens; another might drive digits mechanically (quite popular in the 70s) or even a set of traditional clock hands; whilst yet another might speak the time. Very useful if you need to distribute the time from a central device such as an atomic clock, or for a railway network, or to offices throughout an organisation. But not significant to the average watch-wearer.

Now consider the opportunities presented to that watch-wearer by the digital processing of time. Through simple rules and logic a watch could: calculate the time for any time zone; calculate sidereal and planetary times; act as a stop-watch, lap-timer, interval-timer or alarm; or even mark the hours, half hours and quarters in the manner of a chiming clock.

For an analogue device, the ability to perform any one of these additional functions would increase the complexity and cost significantly. In the 18th and 19th centuries, clocks that struck the hour had an extra gear and power train solely to drive the striking mechanism. Chiming clocks had a third train with which they could mark the quarters. The chimes would ring in the manner of Westminster, Cambridge or Notre Dame Cathedrals. Being mechanical, the chimes that came with your clock were the chimes it played forevermore. Imagine having only one ringtone on your phone forever – actually, that’s just how phones were when they were analogue – they had a bell!

For a long time, systems used both digital and analogue techniques. The fax machine of the 1980s digitised analogue pages, transmitted them digitally to a remote terminal, where they were re-converted from digital to printed (analogue) pages. By the 1990s fax cards were built into PCs so that content originated from the computer itself, could be sent directly to the fax card for transmission.

In the early 2000s magazines were composed digitally but the photographs that appeared in them had to be scanned from analogue photographic images. There was an entire industry based around high resolution drum scanners and the portable media needed to physically move large images from scanning bureaux to design agencies. As the quality of digital photography increased, so the need for digitising images vanished. Images had made a crucial digital leap.

Recall that the internet revolution was fuelled by images – text had been on the internet for years – it was the appearance of images that made the ‘World Wide Web’ a multi-media phenomenon.

Meanwhile, CDs were replacing vinyl records and cassette tapes. Ironically, the low cost of producing magnetic tape made it the ideal media for storage of digital data. Remember floppy discs and tape-backups?

The same happened with films, as digital discs called DVDs replaced magnetic, analogue video tapes at home, and celluloid in the cinema.

Screens and monitors are interesting as they represent the final, output step. CRT screens with their magnetic deflectors were analogue, LCD digital. If you ever saw Windows running on a CRT display you will know the difference. Unlike CRTs, LCDs show a crisp, even image with straight lines and fine-grained output.

Modern flat screen and curved screen TVs are also digital and the output quality is incredible. Far better than printing, which is still an analogue process finally, albeit that the ink is controlled digitally.

Around the time I began to understand that the band Queen had both straight and gay members and that the name was ironic, I started programming business applications on personal computers. I wasn’t aware that this was a digital form – that the code I typed was represented and then executed as digits. Mostly, I wrote systems that stored and organised data; inventory, sales, CRM and such like.

I followed a simple process: I learned about the existing way, usually record books and paper; suggested any improvements that seemed worthwhile; translated it into forms on screen and reports on paper; then got users to make their suggestions on how it could be improved.

The first system I wrote simply computerised the firm’s paper-based records, nothing else. It just used the computer to store the data digitally, instead of storing it in books. The main benefits to the business were the ease of finding information and the speed of adding-up columns of figures. It was digital.

Later, I started a software business and started to create marketing materials: direct mailing pieces, newsletters and fliers. I created them digitally using software, because I didn’t know differently.

Today, I use email, blogs and LinkedIn for marketing – it’s purely digital and I can’t imagine doing it in any other way.

Lately, we see Digital with a capital ‘D’, as used by Government. Business leaders talk about ‘Digital’ and firms that used to be called advertising agencies are now Digital Agencies.

Given that digital has been around since I was 10, I wonder what they mean by it.

Over dinner, a management consultant friend volunteers a neat definition of Digital that he’s read: social, mobile, analytics and cloud. This turns-out to have come from Cognizant.

I happened to be part-way through writing this piece (although he broached the topic not me) and suggest that Digital is anything that’s completed the transition to end-to-end digital.

I think of it as end-to-end digital thinking. Digital origination as well as digital manipulation, and very often digital output too. If you take a (digital) picture on your phone and put it on Facebook it’s read on-line – digital all the way from your mind to the reader’s eyes.

Email is pure digital. Is there anybody still alive that tells their secretary to print out their emails so they can read them on paper?

I threw-out most of my reference books some years ago. If I need information, I get it from Google. When I buy books I buy them on the Kindle. That’s digital.

It’s unthinkable to me that there are CEOs and board members that don’t ‘get digital’ or rely on a CTO to ‘look after that sort of thing’. Yet I know they exist. The practice manager of my local doctor’s surgery refuses to provide email addresses for fear people will send personal details that may be compromised, via email. After she told me that I made a point of guessing her email address (first.last@nhs.net) and sent her a follow-up message. She replied by phone without referring to my email!

The Government Gets Going

The UK government set-up e-GIF, a framework for interoperability of data that affected central and local government. That was in 2004. Not much happened until the end of 2012 when the Government Digital Strategy was published and work began on the new www.gov.uk platform.

Since then, progress has been nothing short of astonishing. GDS adopted Agile methodologies and started delivering websites, digital services, information and standards in an open and transparent manner.

Make no mistake, if Digital is really ‘a thing’, then the UK government is a leading example of Digital achievement.

I’m going to to listen to some music now. There’s plenty of choice: DAB; YouTube; or any of the digital internet stations. One of them will have what I’m searching for: Bohemian Rhapsody by Queen, of course.

The Future of Agile Leadership